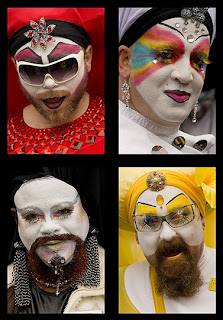 The annual Portland Gay Pride Parade took place on Sunday, June 14th. Viewfinders' owner/lead photographer Bruce Forster was able to capture some fabulous, incredibly colorful shots of some of the parade participants. Photos posted here feature members of the Portland Sisters of Perpetual Indulgence, a "charitable organization... dedicated to the support, education, and development of the GLBT community." 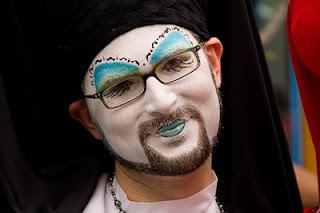 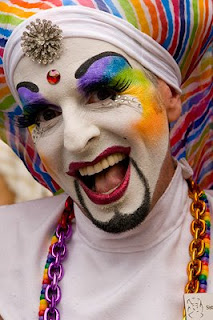 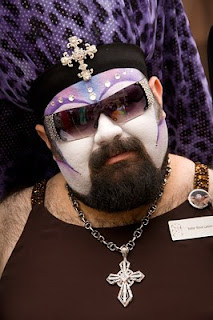 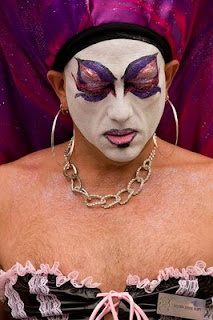 Cheers, Sisters.
Posted by ViewfindersNW at 9:50 AM No comments:

In late April, Bruce Forster, the founding photographer of Viewfinders (and my new boss), mentioned that with the weather in Portland warming up, it was time to start planning for the season's first aerial shoot. Bruce has been doing these for years, and says he can't recall when exactly he got hooked.

Bruce asked if I'd be interested in going along. I said absolutely. He then proceeded to tell me about a shoot several years ago that ended with the pilot finessing a crash landing in the Columbia River. "We ran out of fuel," Bruce explained, nonchalantly. "But I saved the film!" 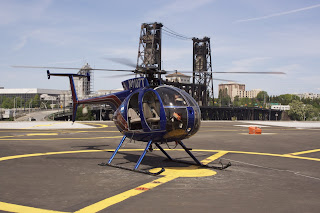 The river 'landing' story did suppress my enthusiasm a bit (I may or may not have checked that my will is up to date). A few weeks later, however, Bruce booked a helicopter and I agreed to go. On a sunny May afternoon, Bruce, Troy Klebey, Viewfinders' studio manager and a talented photographer in his own right, and I drove to the Portland Heliport in Old Town, and hitched a ride with Precision Helicopter.

Bruce had previously described the skills of the pilot he prefers to fly with: agile. "Most pilots keep the helicopter flying as level as possible, especially when there are passengers who haven't flown before. Not my guy. He can pull some sharp, acrobatic maneuvers so that I can get the shots I want," he said.

I thought about those comments as Troy and I strapped ourselves into the back seats of the helicopter, pulling my shoulder belt tight enough to constrict my breathing. Our pilot, Tyler, confirmed that all of our gear was anchored down, as we would be flying without any doors.

Let me repeat that: with. out. doors.
Bruce had encouraged me to bring a camera and take some of my own shots; in his experience, keeping busy during the flight helps prevent air sickness. I wondered if it would distract me from the obvious fear of falling out of the helicopter. All of the shots on this page were taken by me; to check out how it looks when a real pro does it, go to www.viewfindersnw.com/category/aerial.

It took the engine and rotors a few minutes to get up to speed, and then, in a motion so subtle that I barely felt it, we were off, flying through downtown. We circled the Pearl District a few times; I was able to get a couple of decent shots of the loft building that houses our studio, and some pretty shots of the horizon. 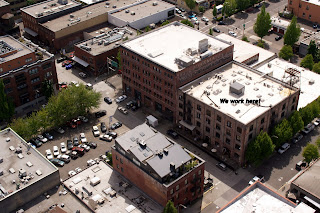 And that's when we started climbing to a peak height of 2,500 feet, quite a bit higher than helicopters typically fly, usually around 1,000 feet. During this ascent, (shortly after I took the shot below of downtown, the near east side and Mt. Hood), at about 2,000 feet, I released the camera, thankfully still attached by the neck strap, and just hung on.

Many people flying in to Portland on a commercial airplane have been gifted with this beautiful view, or one similar to it, so at first glance, the below photo may not seem like anything remarkable. But imagine looking slightly further down: enough to see the left cuff of your jeans flapping in the wind...

When Bruce was satisfied with that series of photos, we descended to a more comfortable working altitude of 500 feet, and headed south to capture other buildings and landmarks as dictated by client assignments. Bruce and Troy worked earnestly, directing the pilot how to angle the helicopter so they could capture the best light, find the most creative angle, get the sharpest shot. 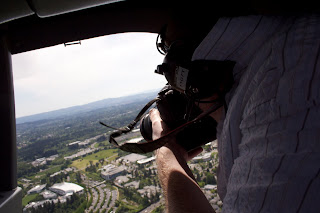 I was incredibly impressed with their stamina and intensity, and yet, their willingness to call out neighborhoods, schools and landmarks to me, the regional newcomer. It was at that moment, tightly belted into a helicopter that was circling a paper mill on the Willamette River, that I realized I could not ask for better guides to my new home region than my photographer colleagues.

After a few hours of shooting, we flew north to PDX to re-fuel the helicopter, giving me a chance to get a closer look at its 500 horsepower engine: 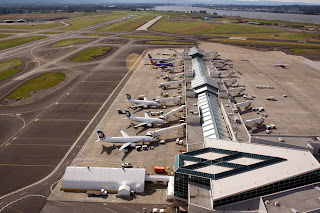 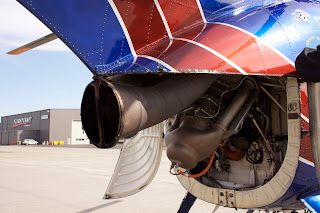 With a full tank of fuel, we headed to the northeast side to get some shots of large-scale solar installations, and then down to the South Waterfront to capture aerial shots of ecoroofs on new high-rise residential buildings. Portland has become renowned for its focus on developing and using alternative energy and green technology; Viewfinders strives to stay on top of these new implementations, and our stock collection features a lot of imagery that highlights these areas.

We landed back at the helipad at about 6 pm, as the evening light was beginning to dim. Bruce asked how I'd liked the outing. I think the below, obnoxious self-portrait says everything:

Posted by ViewfindersNW at 4:40 PM No comments: