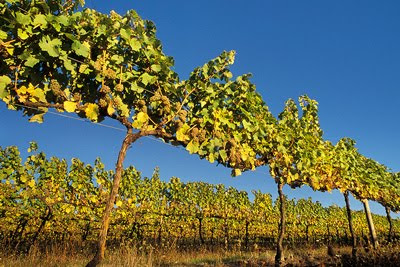 Home to more than 200 wineries, Oregon's Willamette Valley has earned a strong reputation for its production of Pinot Noir, one of my personal favorites. (Other varietals produced in the region include Pinot gris, Pinot blanc, Chardonnay, Melon, Riesling, Gewurztraminer, sparkling wine, Sauvignon Blanc, and some Cabernet, Merlot and Syrah.)

This past Sunday, I headed south to Willamette Valley Vineyards to attend their annual Grape Stomp Championship & Harvest Celebration. We arrived at noon and already, the party was in full swing: a local cover band was playing on the lawn in front of the winery; families, couples and other groups were enjoying wine and picnics on blankets and in portable chairs; and a new heat of the Stomp had begun. 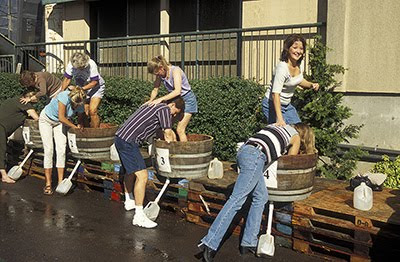 Eight barrels of grapes were lined up on wood pallets; a PVC pipe connected each barrel to a plastic one-gallon jug. Liquid from foot-crushed grapes drains through the pipe to the jug. Teams of two people were assigned to a barrel of grapes; one team member was barefoot in the barrel, the other stayed outside the barrel to provide physical support to the stomper and to ensure the jug stayed properly attached to the pipe. The team who had the most grape juice in their container at the end of the five-minute heat was declared the winner.

Some of the teams were dressed in costumes: togas, to channel Dionysus; suspenders and peasant dresses for more of a provincial look; a bright red satin evening gown that was awfully similar to a dress I wore to a formal high school dance in (ahem) the early 90s.

After cheering on a few heats of the stomp, we enjoyed views of the Willamette valley from our picnic blanket, and of course, some delicious pinot noir. 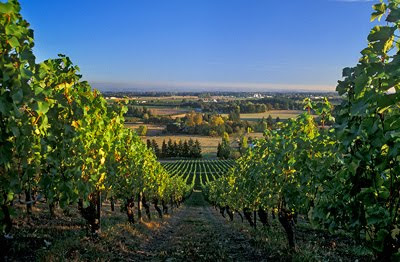 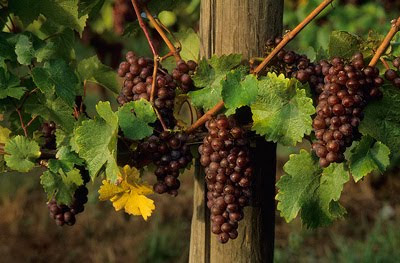 Viewfinders photographer Greg Vaughn has shot dozens of the region's vineyards; his images are posted here. The first two images are of Willamette Valley Vineyards' vines and a previous year's Grape Stomp.

The third and fourth images were shot at Champoeg Vineyard, which is planted on the south facing slope of a small hill known as La Butte, overlooking the beautiful French Prairie.

Below is an image of the Archery Summit underground aging caves, which are modeled on the subterranean cellars of the Côte d’Or. Naturally insulated with volcanic rock, the temperature in the caves remains between 55-59 degrees throughout the year, with humidity below 75 percent. All of the images are available from Viewfinders for licensing or as gallery prints.
Posted by ViewfindersNW at 9:13 AM 1 comment: 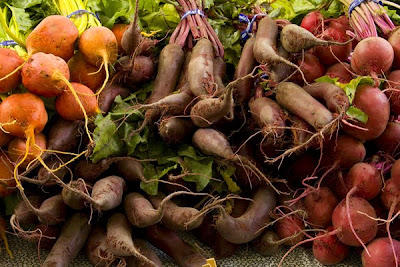 One of my favorite things to do in summer and early fall as a child was accompanying my mother to the local farm stand to buy fresh peaches, apples, cherries, tomatoes, corn and other local produce. I think it felt like such a treat because the Midwestern climate only allows for a few months of local harvesting. The rest of the year, much of the fresh produce we consumed was shipped in from other regions and countries. And no matter how well it's been packaged or transported, week-old apples simply do not taste as good as the ones picked from the tree just yesterday. 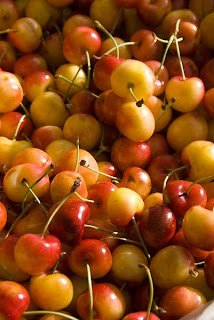 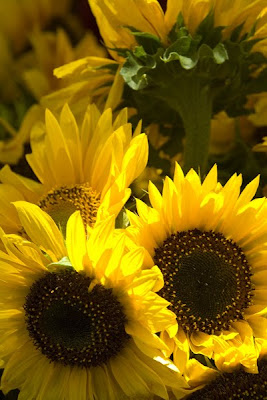 So, as an adult, I've developed a strong affinity for farmers markets, and it's heavenly to live in Portland where various markets run almost year-round. Some of these markets have evolved to be not just about the farmers and their produce: There are often prepared food stands and art vendors, tables hosted by community organizations and nonprofits, and live cooking demonstrations and music. 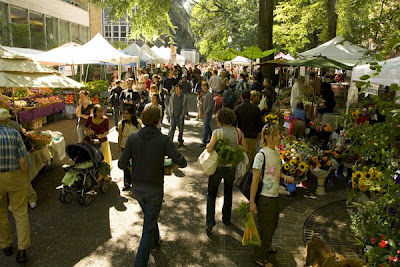 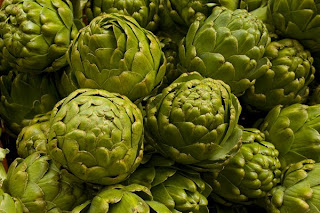 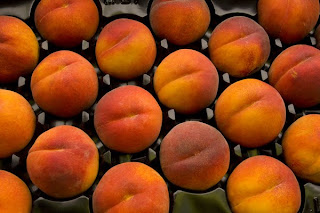 Instead of a stop-off for weekly grocery shopping, farmers' markets are now more like a weekly festival, and yet so intrinsic to the local culture here in Oregon that I don't think most people view them for what they are: a real treat. 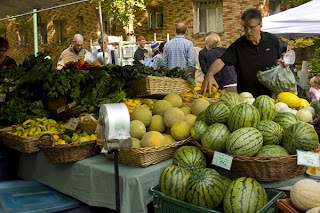 [The images I selected for this post were taken by Viewfinders photographers Bruce Forster and Troy Klebey, and are available on www.viewfindersnw.com for licensing or as prints for purchase.] 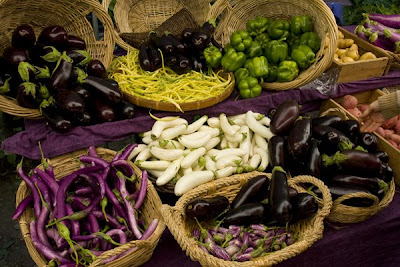 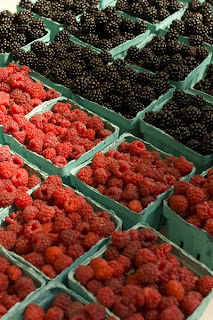 Posted by ViewfindersNW at 2:37 PM No comments: 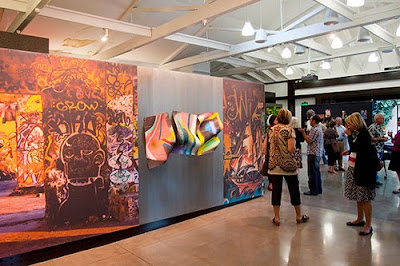 Last Thursday marked the opening night of Viewfinders photographer Bruce Forster's exhibition at the AIA Gallery in Portland's Pearl District. The multimedia installation entitled "Graffiti Funhouse: A Tribute to the Artists of Pirate Town" featured Bruce's colorful photographs and portions of Pirate Town walls that were scavenged during its demolition earlier this summer.

Kudos to Infinity Images, who produced the gorgeous large-format reproductions of Bruce's photos; and to longtime friend and colleague Mel Ulven, whose design expertise led to the creative arrangement of the installation.

The exhibit will remain in the AIA Gallery throughout the month of September. To see even more images that Bruce shot at the Pirate Town site, check out the "Graffiti Funhouse" gallery on his website. 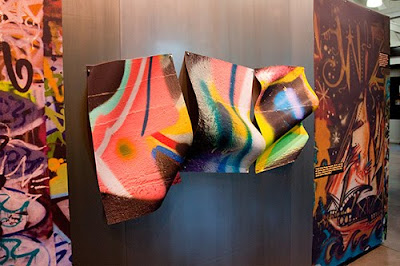 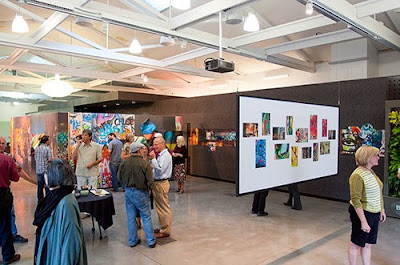 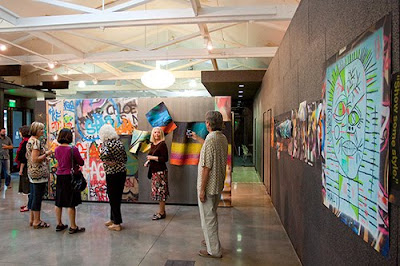 Additional thanks to photographer Troy Klebey who captured last Thursday's event; his images are displayed here.
Posted by ViewfindersNW at 4:23 PM No comments: 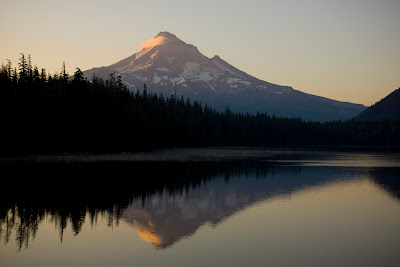 Because Mt. Hood is so clearly and closely reflected in the waters of Lost Lake, the area allows for some of the most scenic views of the mountain and is a popular postcard shot. On the Viewfinders site alone, there are more than 60 photos taken of the lake and in the nearby woods, which are part of Mt. Hood National Forest.

Viewfinders photographer Troy Klebey paid a late evening and early morning visit (almost exactly 12 hours apart) to the lake last weekend, to capture the quickly fading summer light. He came away with hundreds of shots; these were two of his favorites.

When I look at the images, I can hear the voice of Jon Stewart, closing each broadcast of "The Daily Show," saying, "And now, for your moment of zen..." 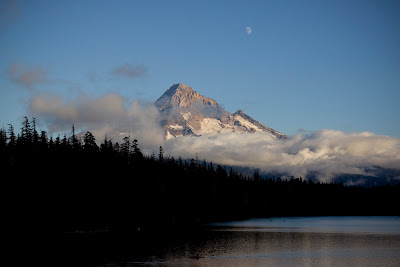 Posted by ViewfindersNW at 12:00 PM No comments: